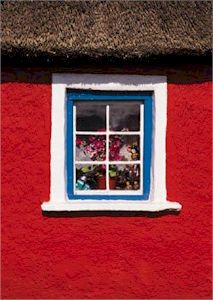 Carlow is a tiny inland county in the shape of an upside-down triangle, south of County Kildare and south-west of County Wicklow. The River Slaney flows through its eastern part, which is an extension of the granite area of County Wicklow. West of this lies the fertile limestone land of Barrow Valley, and beyond to the north-west is pleasant upland country. The county has much to offer the sightseer, the sportsman and the climber.

In the Province of Leinster, Carlow is one of the 12 counties in Ireland that are land-locked. The main town is Carlow, a bustling market town with an ancient history and tradition. Carlow was a Gaelic stronghold, long before it was a Viking and Norman settlement. Nowadays, many castles and monastic ruins attest to rich history of this fertile hinterland. Fiach McHugh, a 12th century chieftain sacked Carlow in an ill-fated uprising, but is memorialized in Christy Moore’s/Planxty’s song about the event, from which it could be said the current Celtic music revival got its nascence! Famous for its Hurling tradition, Carlow has also produced many wonderful folk singers and musicians.