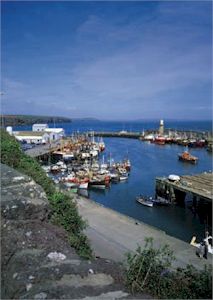 County Waterford, on the south coast, combines many kinds of beauty in its scenery. Much of the north and centre of the county is mountainous, including the Comeragh range with its fine lake corries; the rest consists mainly of gentle hills and valleys. The coastline is a series of rugged headlands, cliffs and sand-fringed bays; Tramore is the best known of several attractive resorts.

On the north and east the county is bordered by the pleasant River Suir; in the west the Blackwater Valley, with its flanking hills and numerous wooded stretches, provides the finest river scenery in Ireland. The River Blackwater rises in County Kerry and flows eastwards through Cork and Waterford, turning southwards at Cappoquin to flow in Youghal Bay by a narrow estuary 15 miles long. The most beautiful part of the river is in County Waterford – from near Fermoy (County Cork) past Ballyduff, Lismore and Cappoquin to Youghal.

Waterford, in the south-east of Ireland, was probably one of the original settlements in Ireland by the original pre-Celtic nomads who came across the then-short channel from Europe. Followed successively by The Celts, and The Vikings and the Normans, Waterford with its naturally deep and safe harbours (like Dunmore East, shown here) was the obvious port-of choice for all trade and invasions. Today Waterford still boasts a large Irish fishing fleet, at Dunmore east, and also some of Ireland’s most pristine beaches. The towns that dot the coast, from Waterford city itself to tiny Woodstown, boast great restaurants, quaint pubs, antique and curio shops and much, much more. The world-famous Waterford Crystal has its home here.

County Waterford is a maritime county with no part of it being more than twenty five miles (40 km) from the sea. At it’s widest points the county is fifty one miles wide and twenty seven miles long but contains a variety of landscapes and scenery that are rarely encountered in such a compact territory. The spectacular plateau of the Comeragh mountains rises up 2,600 feet above sea level in the center of the county. The earliest proven settlers arrived in Waterford some 9,000 years ago. These were Mesolithic in culture and survived byhunting, gathering and fishing.

There are sixteen such megalithic tombs, ten portal tombs (or dolmens) five passage tombs and one court tomb. Some 4,500 years ago the first metal using people settled in this part of Ireland. They brought the stone, box like structures tapering to one end, known as wedge tombs. They also had cist burials in stone lined pits, tumulaus burials and barrows. About 500 years ago the warrior aristocracy considered to be Celts settled here, building strongly defended settlements in the hills and on promontories over looking the sea. Waterford contains two hill forts and over twenty promontory forts. More common are the lightly defended iron age farmsteads known as raths, fairy forts or lio’s. These were usually circular enclosures, frequently tree covered, about fifty metres in diameter