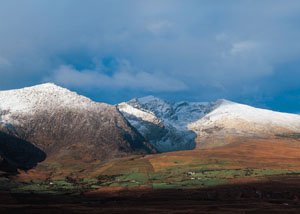 One of the most beautiful of Ireland’s inland counties. Tyrone has a fine variety of scenery, mountains and gentle hills, glens and river valleys, moorland and little plains. There is some low land bordering Lough Neagh in the east, and in the river valleys in the north-west, but the rest of the county is hilly, and towards the County Derry border in the north and land piles up in the 2,000 foot peaks of the Sperrin Mountains.

This is a wild yet welcoming land of forests, mountains and a rich historic heritage. For a change of pace (and a spot of shopping) savour the atmosphere of busy towns such as Omagh, Dungannon and Cookstown. Autumn is the perfect time to motor through the Sperrins and you can stop off on the way at An Cregan Visitor Centre for refreshments.

In the north-west of Ireland, it’s capital is Omagh, outside of which the Ulster Heritage Folk Park, attracts thousands of visitors annually, tracing their ancestry, or marveling at the realistic recreations of homes and implements which made up life in the past centuries in this area. Set sail on a voyage of discovery where the story of our unique contribution to the New World is graphically encounted. There’s also a great programme of events at Hallowe’en. Equally fascinating is the Ulster History Park which gives a close-up view of ancient Irish lifestyles. Similar in context to Williamsburg in Virginia, the folk park traces, among others, the lives of several US Presidents who hail from these northern counties, the most recent of whom is president Bill Clinton. In fact, several of the signatories to the US Constitution in 1776, were from this area!

Tyrone is one of the counties which make up the ‘Six Counties’ of the current Northern Ireland. Tyrone Crystal, similar to Waterford crystal is made here!