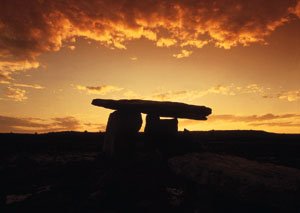 The River Shannon and Lough Derg form the eastern boundary of County Clare. On the west is the wonderfully varied Atlantic coast, with mighty cliffs, caverns and sandy bays. To the north this rugged coast rises nearly 700 feet above the sea in the sheer Cliffs of Moher.On the south is the broad Shannon estuary, where Ireland’s greatest river meets the sea

The magnificent Poulnabrone Dolmen in the Burren in County Clare is both impressive and awe inspiring. Dating back to 2000 – 2500 BC, this magnificent megalithic tomb sits in the middle of the limestone plateau known as The Burren, a unique geological formation which brings visitors from all over the world for the flora and fauna as well as the pre-historic landscape. County Clare has more than it’s fair share of interesting geology.