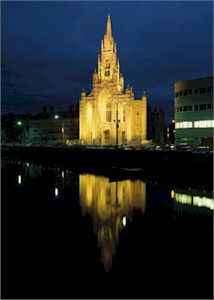 Cork city, the second City of the Republic of Ireland, has a population of 140,000 people, Like Venice, Cork City is built upon the waters, and the City Centre is built on an island in the River Lee just upstream of Cork Harbour. The two channels of the River Lee which embraces the City centre are spanned by no less than sixteen bridges and this gives the City a distinctive Continental air. However it is often said of Cork City that it has all the amenities of a large City, but still retains its pleasant atmosphere, and extreme friendliness, which you will experience on your visit to the City.

County Cork derives it’s name from the County Town that has now become Ireland’s 2nd City. From the Irish word Corcaigh – meaning marsh, the city was founded by St. Finbarr in A.D.650 on the marshy land banks of the River Lee. The narrow waterways, river and alleys give the city a continental feel with the heart of the city lying on an island between two arms of the river. Many fine buildings and churches are dotted around the city and the steep lanes that rise from the north and south of the central island offer great views of the city. The county is the largest in Ireland with many pretty towns and villages as well as a spectacular coastline.