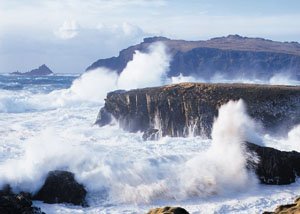 Derry is mainly a hilly county, with scenic hills, glens and river valleys. To the south the Sperrin mountains, culminating in Sawel (2,240 feet), mass along the border with County Tyrone; in the north is the Atlantic coast, fringed with magnificent beaches of surf-washed sand. Derry city, on a commanding hill overlooking a broad tidal curve of the River Foyle, is an ancient and historic town. On the northern coast near Downhill is Benone beach, and throughout the county there are numerous tourist attractions.

In the north-west of Ireland, is at once one of the counties of Ulster and of the Six counties that make up Northern Ireland. It’s capital is Derry city. It was the home of the O’Donnell clan, who with the O’Neills, were known as the Earls of Ulster, and whose tales of conflict with the Crown forces would fill many books. Derry has been a seaport for thousands of years, a point of departure from Ireland, and is mentioned in this context in hundreds of songs, the most famous of which is probably the song ‘Danny Boy’ which is set to the music of ‘The Derry Air’.

Nowadays, a bustling business center for the north-west, it still has a charming feel to it, with music at every turn, no wonder then that it is the home of Dana and Phil Coulter, two of Ireland’s most successful modern-day lyrical successes.