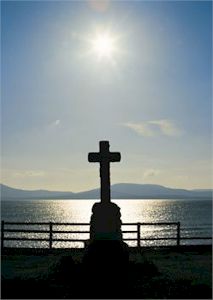 Down, one of Ireland’s most fertile counties, is remarkable for its many low, beautifully-cultivated hills. In striking contrast is the granite mass of the Mourne Mountains in the south, where Slieve Donard rises from the sea to 2,796 feet, Slieve Croob (1,755 feet) tops another group of hills in the centre of the County. In the east, the Ards peninsula forms a barrier between the sea and the almost land-locked Strandford Lough, Bangor, Donaghadee, Newcastle and Warrenpoint are some of the fine resorts that line the beautiful Down coast; they are linked by good roads that closely follow the winding shore. County Down has many important historic sites and ancient monuments, together with attractions for the sportsman, the climber, the walker and sightseeing tourist. The county includes the part of Belfast that lies east of the river Lagan. .

On the north-east of Ireland, Down is one of Ireland’s most interesting counties, bordered on the north by Belfast, most of its towns are dormer towns for that thriving city. The towns of Bangor, Hollywood, Ardglass, Newcastle and Portaferry are typical of the now-modern Victorian seaside resorts. Newry in the south of the County is probably the busiest border crossing to Southern Ireland and is therefore a bustling trading town. The mountains of Mourne, which truly, in Percy French’s words, “sweep down to the sea”, are a very popular area for tourists.