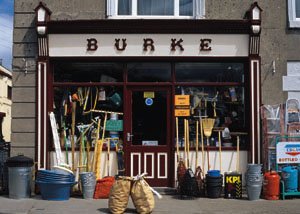 Galway is a large county divided into two contrasting regions by the expanse of Lough Corrib. To the west, lying between the lake and the Atlantic, is Connemara – a region of superb scenic grandeur dominated by the rocky mountain range known as the Twelve Bens. Connemara has inspired many famous paintings, and a tour of the district is a memorable experience. A great
many of the inhabitants are Irish speakers, and much of the ancient Gaelic culture is preserved.

The sturdy, Connemara pony is particularly prevalent in the coastal area west from Spiddal and in the district lying between Oughterad and Clifden; the Connemara Pony Show is a popular annual event. East of Lough Corrib, a fertile limestone plain extends to the Galway-Roscommon border and the River Shannon. Galway City with its seaside suburb of Salthill lies south of the lake. It is an important tourist centre and a gateway to the scenic areas of the county.

Galway celebrated its 500th anniversary as a city in 1986. Originally a Gaelic settlement, it was quickly adopted by the Normans as their primary Western trading city. The Spanish and French sailed their galleons to Galway for hundreds of years trading their wines and brandies for metals and wools from Ireland. Galway still has a very obvious merchant town feel with the city centre a warren of narrow lanes and paved street packed with interesting pubs and shops.

Connemara, Galway’s west coast, boasts beautiful Mountain, Bog, Lake and Coastal scenery and if you have seen the classic 50’s movie, The Quiet Man starring Maureen O’Hara & John Wayne, then need I say more. Off Galway’s coast are the Aran Islands, perhaps the last bastion of living Celtic and Gaelic Ireland, where Irish/Gaelic is still spoken and the old traditions are still practiced. It is a popular day-trip for visitors annually.