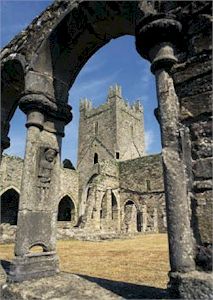 The central part of County Kilkenny is undulating limestone plain, bordered in some areas by gently sloping hills. In the north are the attractive uplands of the Castlecomer district and the Slieveardagh hills and Booley hills extend across the County Tipperary boarder on the west. There are many pleasant landscapes, especially in the Rivers Nore and Barrow valleys, and the historic county town has numerous points of interest. Kilkenny is also excellent sporting country, with good opportunities for hunting, angling, shooting and golf.

Kilkenny City, was home to one of Ireland’s most influential Norman families, the Butlers of Ormonde, who founded the town on an existing Irish settlement, at the confluence of the rivers the Barrow, the Nore and the Suir.

The city of Kilkenny boasts Ireland’s most preserved Medieveal town centre, and the Castle and Cathedral which dominate the town are gems of Irish architecture.

The county has numerous ancient sites including Iron Age fortifications, inscribed stones and crosses, castles, and abbeys. It became a part of Leinster province in 1210.

Kilkenny also has the distinction of having its own indigenous marble (jet black) and its own adopted animal, the Kilkenny Black Cat! The team colors of Kilkenny, the vertical Black & Amber stripes strike awe and fear in opposing players on the Hurling field, their county past-time.