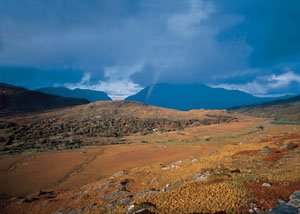 County Leitrim extends for over 50 miles from the County Longford border to Donegal Bay, where it has a coastline of two and a half miles. It is divided into two parts almost wholly separated from one another by an expansion of the River Shannon, Lough Allen. The area north of the lake is mountainous, reaching its highest point of just over 2,000 feet on the Sligo border, north of Glencar Lake. East of Lough Allen is another mountainous area in which Slieveanierin (1,922 feet) is prominent. South of the lake is an area of little hills interspersed with many lakes. Leitrim is a county of fine lake and mountain scenery and of good angling waters, with many attractions for the climber, the walker and the cyclist.

One of Ireland’s least populated counties, the tiny capital county town of Carrick-on-Shannon has become a thriving tourist centre. The town’s location on a tight bend on the river Shannon has made it a popular centre for boating. The newly opened Shannon-Erne waterway is a labyrinthine system of rivers and lakes passing through unspoilt border country from Leitrim to Fermanagh. The wonderful victorian brick canal with it’s 34 bridges and state-of-the-art technology which open the 16 locks was completed in 1993, a cross border joint venture billed as a symbol of peaceful cooperation between the North of Ireland and the Republic.

Leitrim remains unspoilt, a haven from the stresses and strains of modern urban living. Wherever you are in Leitrim, you are sure to be made welcome and perhaps even join in the music, song and dance, so characteristic of the area