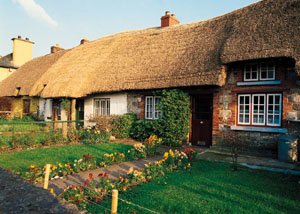 Much of County Limerick is low and undulating-particularly in the east, where it forms part of the rich plain known as the Golden Vale. There are, however, considerable elevations towards the west, south and north-east fringes of the county, and in the south-east the Galtee mountains reach into County Limerick from neighbouring County Tipperary.

Limerick city, standing where the River Shannon becomes tidal, is an historic place with many interesting features; it is also an important port and industrial centre. The county is a place of quiet beauty and rural charm, offering good sport to the angler and golfer and some of the finest hunting country in Ireland. Many 12th century churches can be found throughout Limerick and The Hunt Museum houses a fine collection of Irish and European religious art. Recently moved the Hunt Museum in the Old Customs House is one of the finest collections of antiquities in Europe. The Augustinian Friory has a true medieval feel, while the 13th-century Trinitarian Abbey is the only house of the order in Ireland. Both are still in use, the former by the Church of Ireland, the latter by the Catholic church

Adare Village a few miles from Limerick City is billed as the prettiest village in Ireland. Restored in the 1820’s by the Earl of Dunraven the long narrow village street is a picture of neat stonework and thatch roofs. The county spreads out around the mouth of the Shannon, Ireland’s longest river, and it’s main focus Limerick City built on the river where it meets the Atlantic Ocean. Ireland’s third largest city, Limerick, is home to a grid of gracious Georgian terraces and earlier medieval town plans.