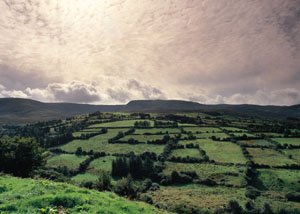 Longford is an inland County of quiet farmlands and brown bog, with occasional low hills and pleasant views of lake and river. It is bordered by Counties Leitrim, Cavan, Westmeath and Roscommon – being separated from County Roscommon on the west by the River Shannon and its lakes.

The highest point in Longford is Carn Clonhugh (916 feet) one of a range of low round hills extending south-west from Lough Gowna on the County Cavan boarder. The county offers angling, hunting and shooting, and should interest the lover of literature in the association with Oliver Goldsmith, Maria Edgeworth, John Casey and Padraic Colum.

The general aspect of the county of Longford, viewed from a height on a fine summers day, is inviting and pleasing. Taking one’s stand on the summit of Lisduff, and looking due north, the visitor will see a deep rolling plain stretch out before him for a distance of perhaps ten kms. bounded by historic cairn Hill. On the right and left of this hill the country slopes down to a fertile level plain, beautifully wooded, through whch the Camlin flows to the Shannon. In a north eastern direction the rising country about Granard looms up in a succession of hazy hillocks, with bright green pastures and dark green plantations. Looking to the east is the view of Ardagh’s woody heights, beyond which lies a lovely stretch of fertile country.

Home of the Longford Slashers, the nickname given to this county’s premier Hurling and Football team, Longford boasts a long shoreline with the river Shannon’s largest Lake, Lough Ree, attracting thousands of visitors annually for fishing and especially for cruising on the Shannon. Maria Edgeworth, the 19th century author, hails from here, as does Lord Longford, one of England’s more controversial peers. Oliver Goldsmith, the 18th century poet, also hailed from the south of the county.