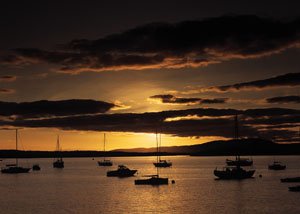 Louth, the smallest county in Ireland, covers an area of only 317 square miles. It runs northwards from the River Boyne to Carlingford Lough, consisting mainly of fertile undulating country with a coastline of wide sandy bays and occasional rocky headlands. In the North, however, between Dundalk Bay and Carlingford Lough, is the mountainous Cooley Peninsula. The territory now known as County Louth figures prominently in the epic tales of ancient Ireland. It was also the scene of important events, and many other chapters of Ireland’s history are illustrated by the county’s numerous relics of the past.

Louth has great industrial towns like Drogheda and Dundalk as well as sleepy fishing villages. Pictured above is Carlingford Lough, part of a drowned river valley at the base of the Cooley Mountains. The fishing village of Carlingford is the Oyster capital of the country and the oyster festival draws huge crowds every August into the pretty village of white washed cottages and ancient clustered buildings.

Monasterboice, one of the most famous religious sites in the country, was built in the 5th century a few miles north of Drogheda in a lovely secluded setting. With 2 churches, a round tower and 2 High Crosses the treasure is the high Cross of Muiredach. Considered the finest in the country, it is the pinnacle of achievement with sculpted biblical scenes all over the cross, and still as fresh today. Drogheda at the southern most point of the county is built on the River Boyne and by the 14th century was the biggest town in Ireland. Exporting and Importing more goods than any other town. However, it never recovered from a vicious attack by Oliver Cromwell in 1649 and the Battle of the Boyne in 1690 where the catholic king of England, James II, defeated by William of Orange and heralding the fate of the country for the next 300 years.