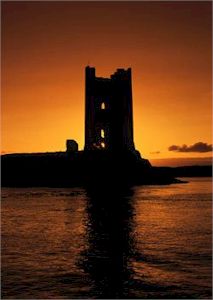 The County Mayo coastline, from Kilary Harbour to Kilala Bay, has a wonderful succession of views-of sandy beaches, cliffs, rugged headlands and islands. The shore of the bay known as Killary Harbour marks the border seperating the counties of Galway and Mayo. From here the road leads through a wild and romantic valley containing the ‘black lake’ of Doo Lough, and then on to the pretty village of Louisburgh with it’s 18th century houses. The natural beauty of the green countryside, the friendliness of its people and general ambience make Mayo a place where visitors can relax and enjoy nature far removed from the hassle and pressure of modern city life. Mayo, with an area of 5,398 sq.km, is the third largest county in Ireland.

To the east is Croagh Patrick, Louisburgh, a conical mountain on which St Patrick spent the 40 days of Lent in AD 441, before defeating the pagan deity Crom, and from this peak rang his bell and banished all the reptiles from Ireland – which is the reason there are no snakes in Ireland to this day. Croagh Patrick (also known as The Reek) has an oratory on its summit, and thousands of pilgrims (as many as 60,000) climb its 2,510 ft height each July for a mass. The climb begins beside the beautiful ruin of Murrisk Abbey, a 14th-century Augustinian foundation. Spectacular views await climbers at the summit.

To the south the Twelve Pins can be seen, and to the north is island-studded Clew Bay. A prominent feature is Achill, the largest island off the Irish Coast. Inland, too the landscape is remarkably varied, with mountains rising from level plain or moorland or forming colourful backgrounds to islet-studded lakes. Mayo’s attractions include unspoilt holiday resorts, angling, sailing, climbing and golf.