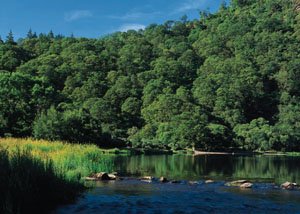 County Meath consists almost entirely of a rich limestone plain, with occasional low hills. ‘Royal Meath’ was for centuries a separate province which included the area of County Westmeath. Meath was part of the Irish middle kingdom from the 2d century BC. It was chartered as a county in 1296. The Royal County…so called because it contained the seat of the High Kings of Ireland on Tara Hill. Proof of human habitation has been discovered in Co Meath which dates back 9,000 years. The richness of its soil has sustained hunters and farmers from ancient times up to the present day and will continue to do so, we hope, into the distant future. This abundance gave artisans and carftsmen the time and sustenance to provide complex structures such as Newgrange, Knowth, Dowth and the passage graves at Lough Crew; to ceate the High Crosses of Kells and Castlekiernan as well as the striking calligraphy of the Book of Kells.

There is much to interest the visitor by way of scenic beauty and of historic sites, particularly in the Boyne Valley. There are also seaside resorts along the county’s coastline. Meath, a county in Leinster province in eastern Ireland, is located on the Irish Sea coast. With an area of 2,336 sq km (902 sq mi). The chief rivers are the Blackwater and the Boyne. Newgrange is the site of one of the largest of the prehistoric passage graves in the Boyne valley. It measures approximately 85 m (280 ft) wide and still stands 12 m (40 ft) high, rivaling a companion structure at nearby Knowth. A single passage 25 m (82.5 ft) in length leads to a cruciform chamber with characteristic corbeled roof and with side chambers containing ornamental stone basins among its grave furniture. Around the outside of the mound stood a circle of standing stones, of which 12 now survive. The stones of the passage and of its entrance curbstone were ornamented with spiral and other designs characteristic of megalithic art in the Atlantic region of prehistoric Europe. The tomb was in use throughout the late Neolithic Period of the 3d millennium BC.

For years Meath’s tourism potential remained practically untapped, but this state of affairs is rapidly changing. There is an increasing awareness and pride in the breathtaking beauty of the Boyne Valley and its capacity to attract visitors today just as it enticed the Celts and Normans who came and remained.