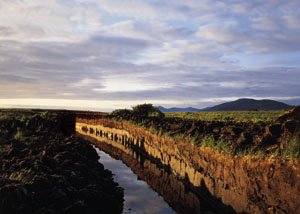 Offaly lies near the centre of Ireland. In the south-east of the county are the Heathery Slieve Bloom Mountains, among which there are pretty valleys to be explored. The rest of the county is largely level plain and bogland, with occasional elevations. In the west the River Shannon separates the county from Counties Galway and Roscommon.

There are numerous points of interest in the towns and countryside of Offaly, including of the most important historic sites in Ireland – Clonmacnois. Offaly has an area of 1,997 sq km (771 sq mi). The River Shannon flows along most of the western border, the Slieve Bloom Mountains rise to 518 m (1700 ft) in the southwest., and the Bog of Allen covers the northeast. Peat is produced here. Dried peat, often compressed into briquettes, is used in many European countries, particularly Ireland, as a fuel, although it is not as efficient as coal because of its large content of water and ash.

The width of the county is crossed by the Grand Canal. Danish raths, or hill fortresses, and remains of ancient churches and monasteries are among the points of interest. Part of the kingdom of Offaly in ancient Ireland, the area was known as King’s County from 1556 until the Irish Free State was established in 1922.