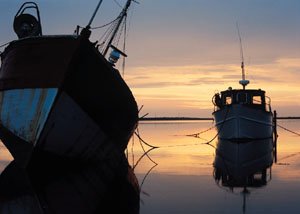 County Wexford is in the south-eastern corner of the country, with a long coastline on both the Irish sea and Celtic Sea. On the north it is bounded by the hills of County Wicklow and on the west by the River Barrow and the Blackstairs mountains. Its fertile central plain is watered by the River Slaney. Wexford’s history goes back to pre-Christian times. Above all, the county is rich in memories of the 1798 rising, when insurgent pikemen fought heroically against overwhelming odds.

Wexford’s name derives from Waesfjoed, a norse word meaning estuary of mud flats. It thrived as a coastal county centered around Wexford town with lots of sea traffic mostly from England and Wales. The silting of Wexford Port in the Victorian era finished most of traffic which moved to Rosslare further south and still remains the county’s main port. Today it is a ferry point with ships from France and Wales bringing holiday makes from all over Europe. Wexford boasts that is the sunniest county in Ireland and has some of the sandiest stretches of beach in the country.

Wexford is a maritime county located in the southeastern Republic of Ireland on Saint George’s Channel. The population of the county is 102,000 there are four main towns: Wexford, Enniscorthy, Gorey and New Ross. The landscape ranges from rolling countryside to mountains and from forests to rugged natural landscape. In the mountainous northwest, the highest point is Mount Leinster (796 m/2610 ft). The county coastline is low, irregular, and hazardous to navigation. Bannow Bay, Waterford Harbour, and Wexford Harbour are the chief inlets. The Slaney is the principal river of the county. Wexford County is dotted with historic sites, Castles and Abbey’s.

The first part of Ireland to be invaded by Anglo-Normans in 1169, Wexford was subjugated by Oliver Cromwell in 1649. Wexford was one of the centres of the Irish rebellion of 1798.

The county provides some of the best leisure facilities available, Blue Flag Beaches, Angling, Water Sports and top class Golf Clubs. It also boasts magnificient hotels and restaurants and some of the best pubs in Ireland. For the holidaymaker in Wexford there are angling and canoeing on the River Slaney, climbing in the Blackstairs mountains, and hunting in several parts of the county.