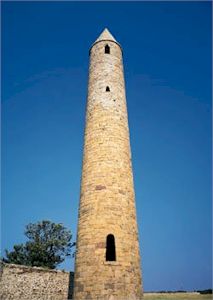 The county of Wicklow, just south of Dublin, has great variety of scenery within its boarders. It is known as the ‘Garden of Ireland’.

In the east of the coastal area is low and sandy, except in a few places where it crops out in headlands; two of the country’s main resorts, Arklow and Bray are along this coast. Central Wicklow is a mass of domed granite mountains, penetrated by deep glens and wooded valleys; it contains some of the finest scenery in Ireland. To the west, the mountains give way to gentler country on the edge of the central plain.

Wicklow has an area of 2,025 sq km (782 sq mi). The Liffey and Slaney rivers rise within the county. The dominant feature of the terrain is the Wicklow Mountains and their foothills; the highest summit is Lugnaquillia (926 m/3039 ft). The rugged, heather-clad Wicklow Mountains, a refuge for Irish rebels in the past, are a popular subject for artists. The county’s interesting ruins and many deep glens, which are noted for their beauty, attract many tourists. Wicklow was organized as a county in 1606.

Round Towers are unique Christian architectural features in Ireland, probably derived from visits to Europe and seeing the great bell towers. At Glendelough in County Wicklow near St. Kevin’s Church is the Round Tower. At over 110 feet, it is one of the largest in the country. They were built between the 10th – 12th century and are believed to have been used as places of refuge and storage for valuables. The doorway was usually 12 feet above ground and reached by a removable ladder, as were each of the floors inside. Although legend has it that their principle function was to keep out maurading Vikings from attacking, it was probably more likely that it was a status symbol of the importance of the church or manastry associated with the tower.